I come by my love of fishing and the outdoors honestly; I'm 1/16 Choctaw Indian from my Mother's side of the family. I've been told that my Grandfather, Clyde Bannister, survived the Great Depression by trapping the Obion River bottom near McKenzie, TN, and made enough money to buy the acreage near the river that became the family farms. Some of that land is still in the family. It's been too long since I've made the trek, but I've walked many miles hunting that river bottom, and burned many calories making that l-o-n-g walk hauling fishing tackle, and batteries to run trolling motors on jon boats to fish there. I used to take a bag of duck decoys and a call after the duck season closed, just so I could watch the ducks work. There's nothing like being in a secluded river bottom by yourself and working the ducks until you're in the middle of a duck cyclone.

I've been fishing, literally, since my parents were carrying me around in a bassinet, and have been fishing the Tennessee River (starting on KY Lake) since before I have memories. But, oh, what memories I do have!

Below are some pictures of some of my family of whom I am so very proud, and consider myself so blessed to have been able to experience the things outdoors that we have done together. 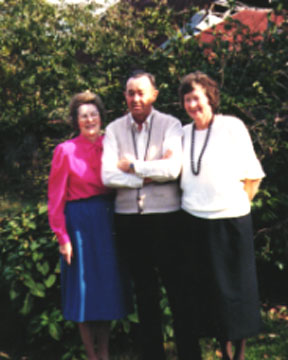 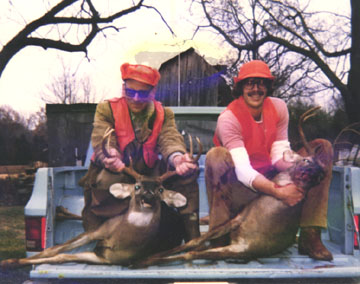 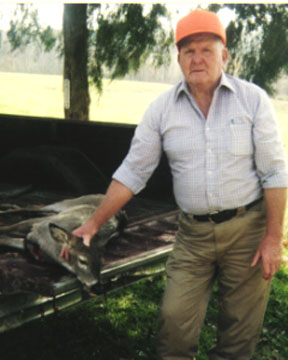 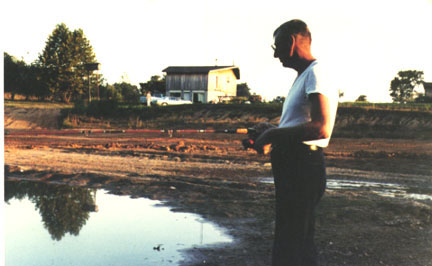 Dad had enlisted in the Air Force and served in Korea. Though a private pilot, he was red/green colorblind, so flew as the radio operator in transports (C-46 Commando) serving the troops in what we now know were the most brutal of conditions. Dad never talked much about it, but after his death I sent to St. Louis for his military records, and received his records, medals, and papers, including a special citation for having flown an especially dangerous mission. I never knew about it.

With Korea over, Dad was transferred to Otis AFB in MA, and after finishing his service took a job with Caterpillar Tractor Co. in Morton, IL. We grew up around airplanes, Dad being a pilot and member of the EAA, and building his own planes from blueprints. We went to the huge EAA Fly-In in Rockford, IL, before it moved to Oshkosh, WI, and camped in a big tent. I have a copy of the newspaper from back in the '60's when I was a boy in Pekin, IL, that has a front page story with pictures and the headline, "Man Builds, Flies Own Plane!" He also bought a partially built aerobatic biplane that someone else had started, then Dad finished it, too. It took roughly 5 years for him to build the first one from scratch. He could build or fix anything, the handiest handyman I've ever seen.

We still love airplanes, and go to big airshows almost every year. Elliott has met both the Thunderbirds and Blue Angels pilots, and hopes to have a career in military aviation, either Air Force or Navy. He is just about to finish up his Eagle Scout requirements. I have LOTS of pictures of the boys climbing ladders to peek into the cockpits of F/A-18 Hornets, F-15E Strike Eagles, and other magnificent aircraft, and we love going to the Air Force Museum at Wright/Patterson AFB in Dayton, OH. Dad built a lot of model planes, and the boys and I do, too. Growing up, Dad, my brother David (also a pilot), and I built and flew many Estes rockets, something my boys and I still enjoy, sort of a bridge to . . .

The Next Generation: Elliott and Jonathan

I have two boys, Elliott and Jonathan, who--as you'll see in the pictures below--are off to a good start carrying on the family tradition of enjoying God's creation and the outdoors sports. As I write this in early 2006, Elliott is 15 years old, 6'4" tall, 230 lbs., and wears a size 14 shoe! And his little brother may turn out to be even bigger! Jonathan is 9 years old as I write this, in third grade, and already weighs 126 pounds. It was 5th grade before I ever cracked 100 pounds, and I turned out to be 6'5" and 256 lbs. Gotta be the hormones in the chicken and beef! I couldn't be prouder of them; both are good students and great kids. And look at some of the things they've already done: 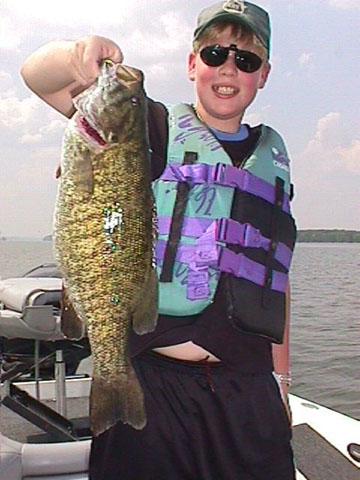 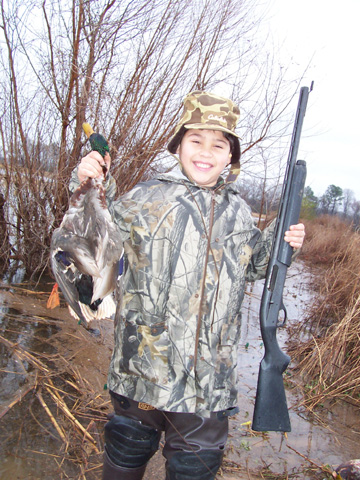 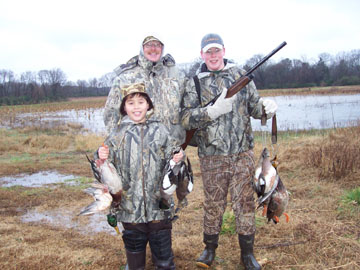 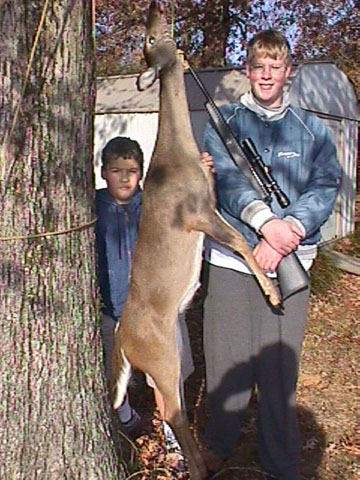 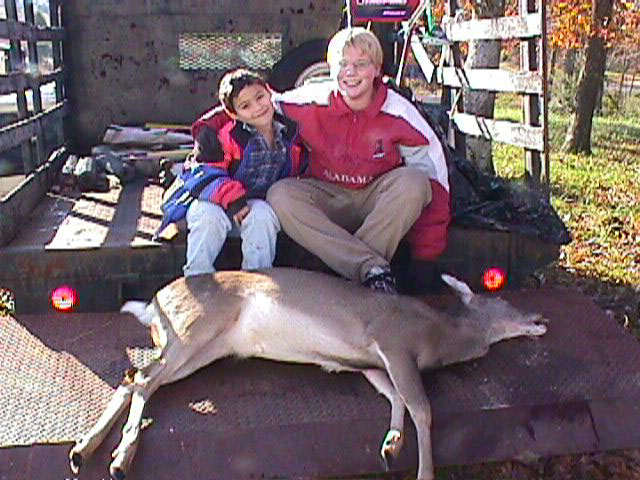 Here are the boys with another deer. That hydraulic gate on my old F-350 sure is handy! 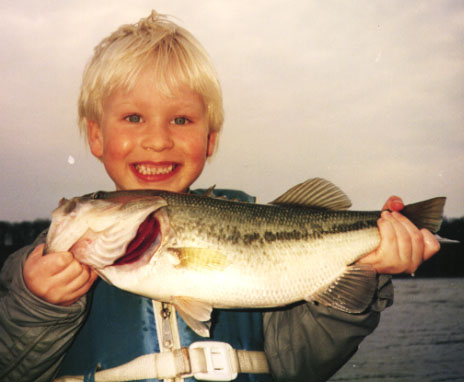 Here's Elliott at 3 1/2 years old with his first nice bass, a 3# largemouth. He got it on Pickwick on a Firetiger 6A Bomber. After he got it in the boat he asked if he could have a Nutty Bar and Coke, and sat back to relax for the rest of our day--except when we would get within 200 yards of any other boat, then he would holler at the top of his lungs, "Hey! You want to see my 3# largemouth bass that I caught on a Model A Bomber Firetiger?" Take a kid fishing! Could there be a better smile than the one above? 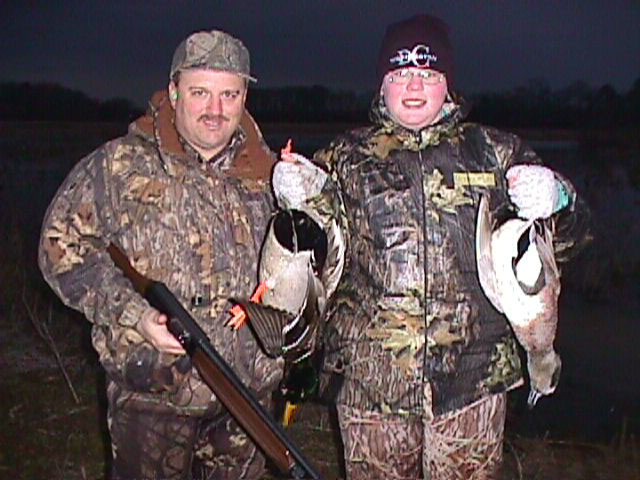 Friend Vic Daily with Elliott and his first ducks, taken in 2004. It was cold! 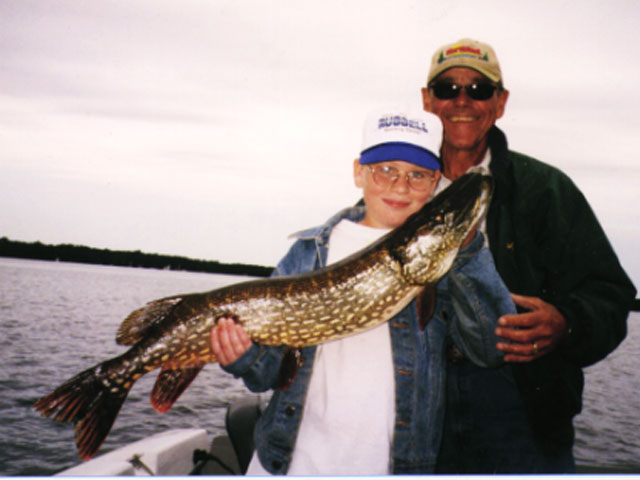 What's an Alabama fishing guide do for summer vacation? Why, he heads to Minnesota to go fishing, of course! Here's Elliott in 1999 (age 9) with legendary Nisswa, MN, guide Marv Koep, who put Elliott on this big pike. 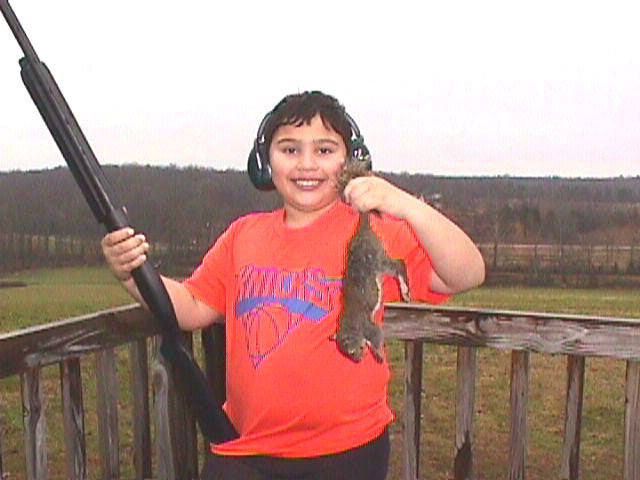 Jonathan and his first squirrel, 2004. Not long after this he busted his first double on squirrels when he hit the first of a pair in a tree, and the second when it hit the ground running. 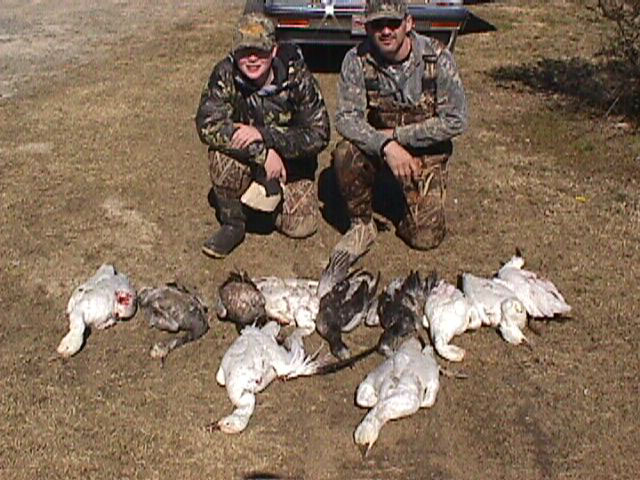 Friend Dave Mansell invited Elliott and me to come goose hunting with him in Arkansas in 2004 (Jonathan was still just a little young to go back then--though he didn't think so!). We had an absolute ball, and still talk about the excitement of having 10,000 geese circling you.  They are the toughest things to kill I've ever taken a shot at. 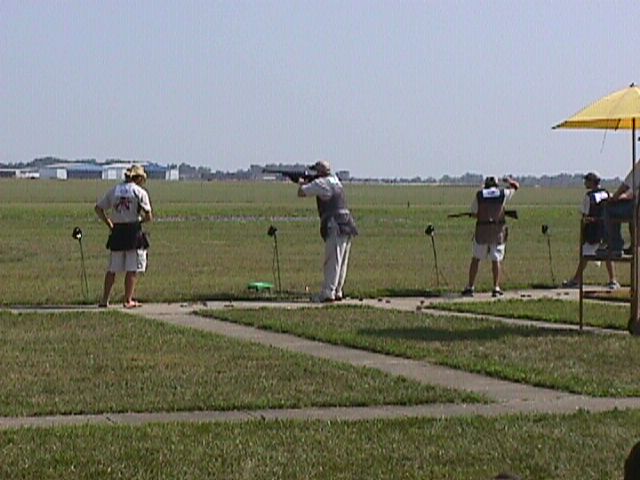 Both boys shoot ATA Trap/SCTP. Here's Elliott breaking a bird at the Grand American in Vandalia, OH, in August 2005, the last year the Grand was held in Vandalia. 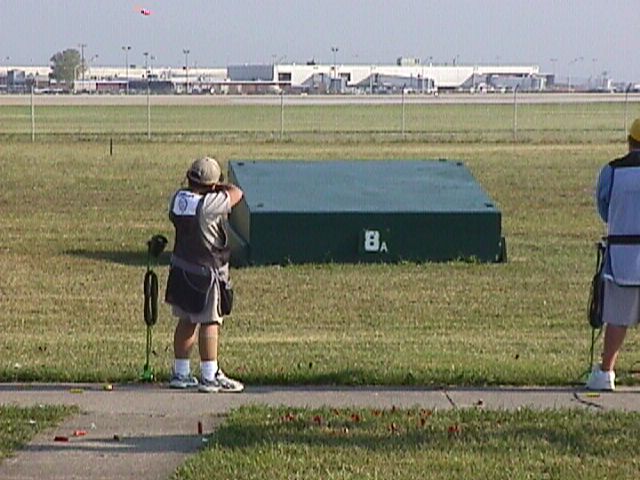 And I got this shot just as Jonathan hit his target, also at the Grand. 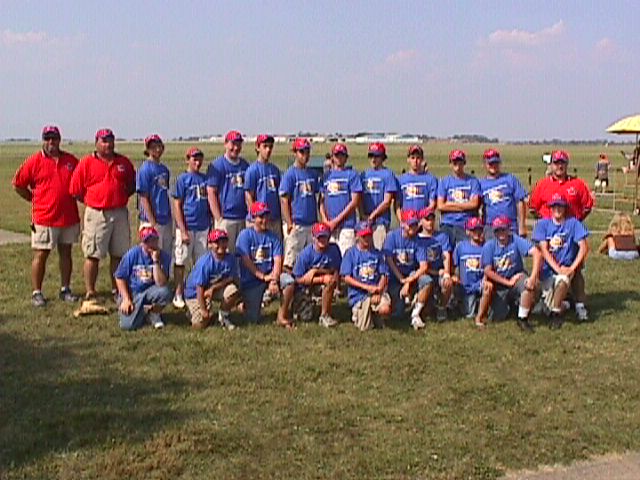 Here they are with their team and coaches, the Shoals Sharp Shooters, at the Grand, 2005. 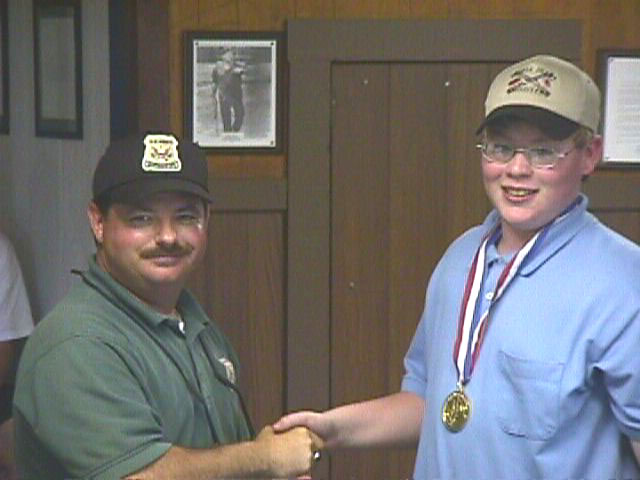 Here's Elliott in May 2004 at Ft. Benning, GA, with US Army Marksmanship Unit Shotgun Coach Dean Clark presenting Elliott with the Gold Medal as the Alabama Junior Division winner in International Bunker Trap. Coach Clark is an Olympic Champion and World Record holder himself, and coaches the Army's trap team. 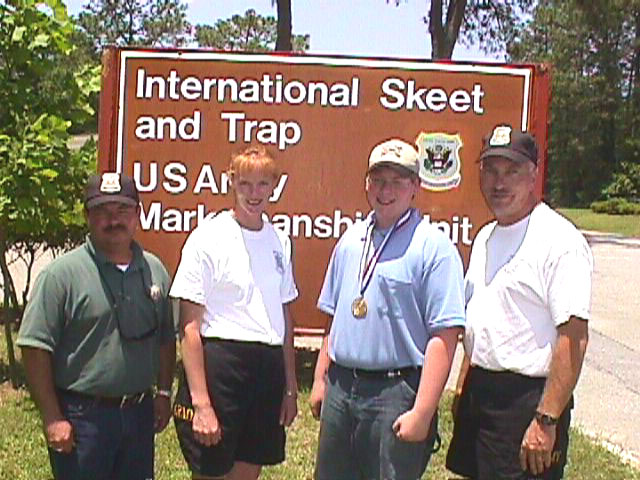 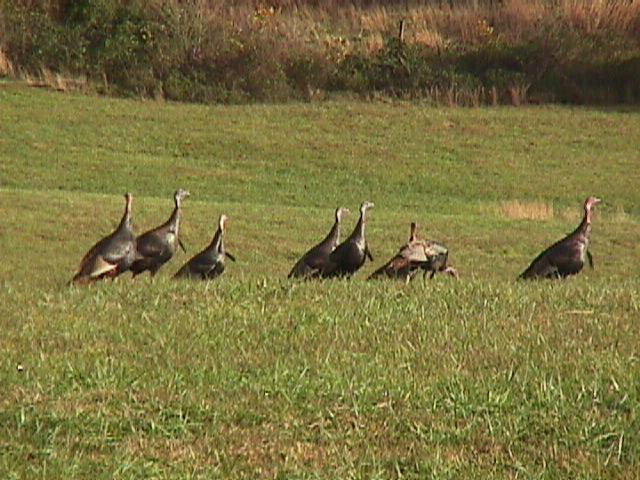 Here are some of the turkeys that periodically show up at our place. I took this picture of this bachelor group of winter Toms from our front door as they passed our deck. There were 13 altogether in the flock, all Toms. 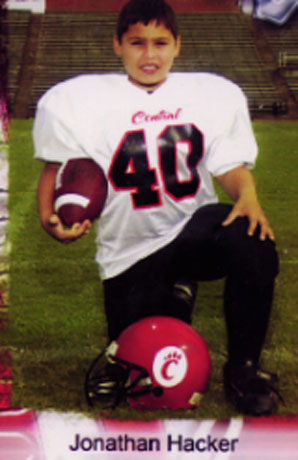 We love almost anything that has to do with nature and the outdoors, and I could add scores more pictures of things that we are involved in. My office is a menagerie of critters from our place, with a 55 gallon aquarium, and four 20 gallon vivaria. We have a pet corn snake, Eastern Fence Lizard, and a pair of Five-lined Skinks.

We're semi-serious lepidopterists, with moths being our main interest, and I enjoy going to schools and giving presentations and providing moth ova for class science projects where they rear them through all stages until they eclose as adult moths. Some of the larvae are spectacular, and make Tomato Hornworms look like nothing. Here's Jonathan holding a larva of Eacles imperialis: 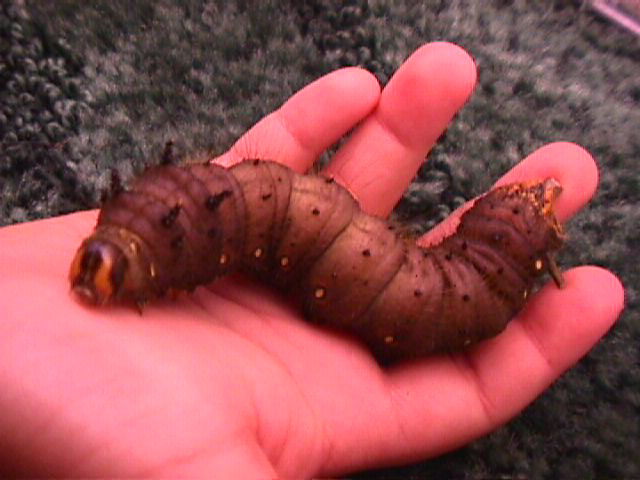 It eventually turned into a spectacular adult moth with a wingspan of over 6 inches. Another of our favorites is Citheronia regalis, also a whopper. Here's picture of an adult I took during the summer: 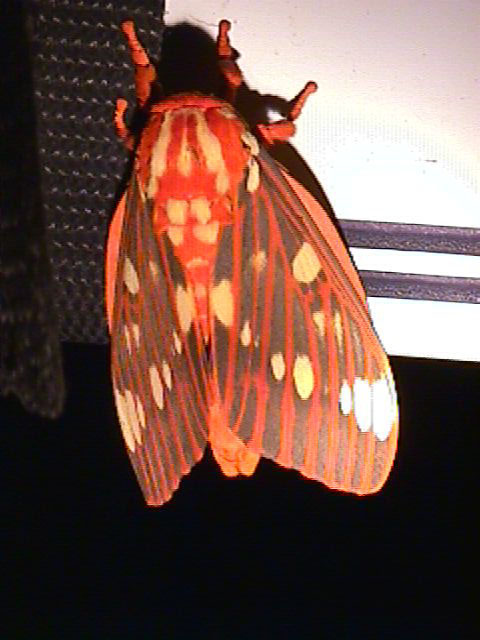 Several of you have seen the display frames I have of mounted moths, and they're a big hit with the students and teachers when I take them to schools.

We're also into birding, and have catalogued 100 species on our homestead. I guess my personal birding highlight, though not on our property, was getting a picture of a Marbled Godwit on a sandbar on Pickwick Lake in September a couple of years ago, only the second record of one here. And we have a Black Lab dog and a Russian Blue cat, keep a 10,000 square foot vegetable garden, and have a 28 tree orchard. As I said: anything to do with the outdoors, we love.

Before feeling that twinge of conscience that let me know that I would never get a good night's sleep if I didn't at least attempt preaching, I was studying to be a veterinarian. I believe I would probably have made a pretty good one, and my love of God's creation and interest in true science (they don't have to be mutually exclusive, though the media, school boards, and federal judges would have us think so) carries on to today.

Here's hoping you're enjoying life as much as we are!